Corinth beachfront building land for sale near to Loutraki on the Gulf of Corinth. The land which has the benefit of sea and mountain views, comprises 1782 s.m. and is only 50 m from the beach which is sandy.

The land which is L shaped is within the city plan and is some 10kms to the west  of Loutraki. Access is directly from a surfaced road and water and electricity supplies are available nearby. A villa of 150 sq.m. can be built on the property.

Loutraki is a cosmopolitan resort on the shores of the Gulf of Corinth and which has become noted for its spa waters, modern thermal baths, its casino and its modern hospital facilities. There are numerous classical sites near to Loutraki and Corinth is only a short drive away.

Loutraki is 110 kms by motorway from Athens airport and also has an express bus service from the centre of Athens which takes 1hr. 15 mins. 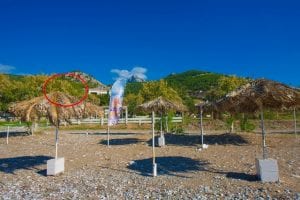