Ikaria beachfront building land is on the Aegean island of Ikaria. It faces directly onto a sandy beach near the village of Agia Irini.

The land comprises 409 s.m. and lies within the village planning zone. The development % is high.  80% of the land area is buildable, so that a two storey villa can be built with a total floor area of up to 327.25 s.m.

The frontage to the sea 1s 13.3m.  Electricity and water are connected and the land is accessed by a gravel, surfaced road.

The village of Agia Irini,  is only 500m away, has tavernas and shops including a chemist and a bakery.  The main town and port of Evdilos is a 5-10 minute drive.

The land provides an ideal opportunity to build a holiday home or permanent residence with the added advantage that it could also become an income producing investment from rentals on the holiday rental market. 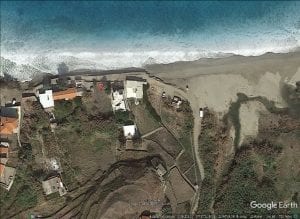 Ikaria is an idyllic location in the Aegean islands, some 19kms south west of Samos. Offering stunning mountain landscapes and unspoiled beaches, it is rugged and wild. It is also noted for its strong red wine and a perfect place in which to relax.

Being one of the worlds five Blue Zones it is also noted that a third of the population live into their nineties. On average Ikarians live 10 years longer than anywhere else in Europe.

Its cultural life is without a single international music or film festival and few museums and art galleries. Ikaria is Greece before tourism was invented, with many  islanders preferring to work as shepherds tending their goats or as fishermen in the coastal villages. Young people are reluctant to leave the island where they have been brought up,  prepared instead to stay  and learn to look after their families land and care for their animals.

Throughout the year there are daily flights from Athens and Thessaloniki to Ikaria National Airport.  Summer flights include other islands such as Crete and Lemnos. The flight time from Athens to Ikaria is 50 minutes.

There is also a direct ferry service from Piraeus which takes 7hr 20 minutes.