Access is by an external marble staircase.
Situated only 5 metres from the beach. The four balconies and patios provide shade and extensive sea views both to left and right.

The property has the benefit of air conditioning, double glazing and insect screens. Furnishings and electrical appliances are included in the sale price. Furthermore, the apartment was fully renovated in 2015. The apartment is well established on the holiday rental market.

Other attractions include the Casino at Loutraki which is only a fifteen minute drive away. Also, the Ancient Theatre of Epidavros which is 45 minutes away.

CORINTH
Corinth was one of the ancient Greek city states and retained its importance well into Roman times. Lying on the Isthmus joining the Peloponnese to the rest of mainland Greece it is now famous for the Corinth Canal and classical ruins of Ancient Corinth 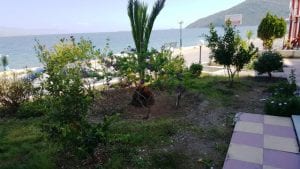 KATO ALMIRI
Kato Almiri is easily accessible with regular bus and train services to Athens airport. By road the journey to the airport is 114 kms, most of it by motorway. By train the journey takes 1hr. 30 mins.

Apart from traditional beach activities Kato Almiri is close to a number of other attractions, including Corinth and the canal, the ruins of Ancient Corinth and the Casino at Loutraki which is only a 15 minute drive.  The ancient theatre of Epidavros which presents open air performances throughout the summer is a forty five minute drive. Loutraki is also home to a new spa with its remedial treatments which attract visitors from all over the world

Shopping facilities including a bakery, tavernas, and a mini market are all available within 200m. of the apartment.