THE MANI PENINSULA AND DEEP MANI

The Mani peninsula begins where the Peloponnese mainland finishes at the regional capital of Kalamata.

Kalamata, a seaside resort in its own right has its own attractions with a long promenade, a modern marina and a popular old quarter.  Its majestic mountain back drop is often snow covered for several months of the year.

Drive along the seafront, turn right at the lights and you are in the Mani pensinsula.

The road soon rises to provide stunning coastal scenery.  Mani is mainly mountains with only a narrow coastal plain. Here the mountains can be heavily wooded.  In many places the woods go straight down to the  sea. Alternatively take the low road through small seaside villages which saw the start of the Greek struggle for indpendence against its Turkish rulers.

Villages in Mani are small  quaint and traditional. One of the first you come to is Doli with its narrow alleys and cobbled streets. From Doli go down to the beach road and head for the tiny and historic, picturesque hamlet of Kitries.

It is difficult to believe that the leadership of the Greek revolt against Turkish rule, first assembled in Kitries.  Maniots were fierce fighters. In 1821 the Turks were ejected from the Mani, Kalamata itself was freed and Nafplion was declared the first capital of the new Greek state. 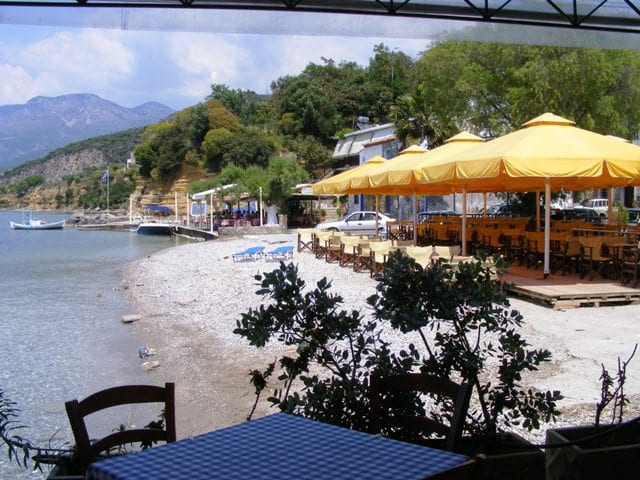 Now, Kitries is a pretty fishing village . It has a small harbour, two or three tavernas on the waterfront, two beautiful sandy beaches and a few houses. It is the epitome of picturesque and peaceful natural beauty.

Kardamili is a sleepy fishing village for most of the year. The exception is in August, when it is host to the International Jazz Festival. The main street has a selection of cafes and tavernas mostly built of 300 year old stone. The traditional bakery and mini market still flourish.

The magnificent  Taygetos mountains rise 2,400 m. above sea level. The area is a paradise for walkers and hikers, with a network of footpaths leading  out of the village.

The two main resorts in Mani are Stoupa and Agios Nikolaos. Stoupa has has a large bay with an excellent sandy beach lined with beachfront cafes, bars and tavernas. This is family holiday Mani, albeit with a second smaller and quieter bay next to it. Slightly inland is the village of Neohori where much of the residential holiday development has taken place.

Agios Nikolaos is a traditional fishing village with a harbour, lined with cafes and tavernas. A range of shopping facilities, include  mini markets and just past the harbour is the sandy beach of Pantazi.   For the energetic, a coastal footpath leads from Agios Nikolaos back to Stoupa.

From Agios Nikolaos one can  venture south  into Deep Mani A more rugged and barren landscape with steep cliffs, allowed once abandoned villages such as Vathei to be built inland  for protection from marauding Pirates. Now these once abandoned houses are sought after for renovation and modernisation.